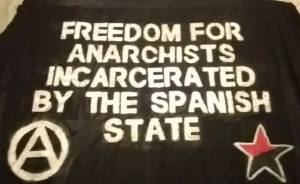 Barcelona, Catalonia 01.06.15: Upon the request of the Information Brigade of the National Police the National Court has issued an order signed by judge Eloy Velasco that orders the closure of solidarity bank accounts that were opened for comrades who were arrested and detained during the Operation Pandora repressions. The judge has also ordered an investigation into the owners of the accounts as well as all transfers and transactions related to the accounts.

Strength and solidarity to the anarchists in Spain facing repression from the Spanish police state!