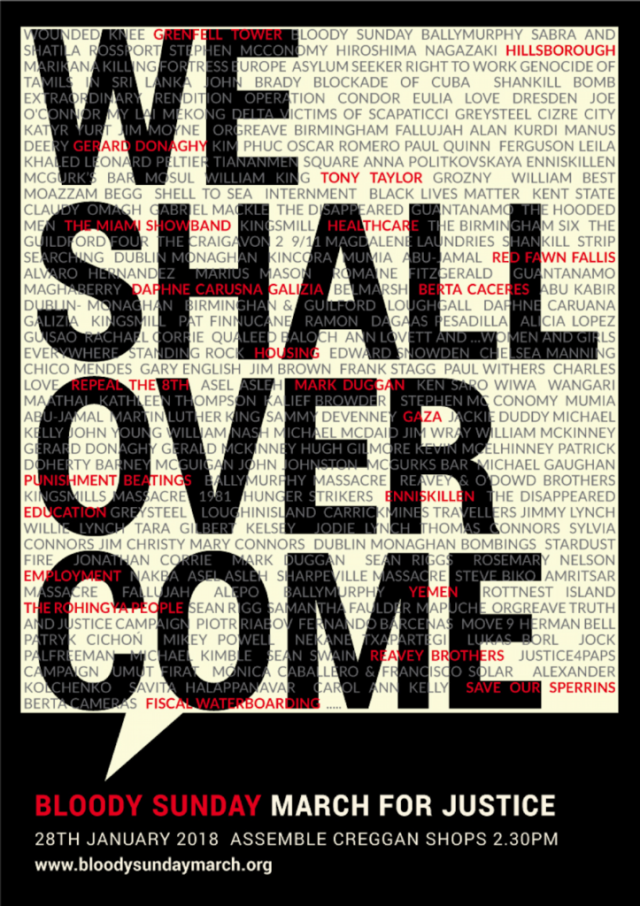 As a gesture of international solidarity the Sam’s name has been included to this years annual Bloody Sunday Commemorative poster which will lists a host of other names and campaign’s throughout the world who continue to fight for truth and justice, under the theme of this years events which is title ‘We Shall Over Come’.

Sam Faulder is an anarchist prisoner currently serving a life sentence in England. Sam continued imprisonment is a miscarriage of justice which has gone on for over ten years in the prison system.

She has been an anti-authoritarian her whole life and was relentlessly targeted by police because of her lifestyle choices. After serving nearly two years on remand, Sam’s trial was a disaster. Police corruption impacted her trial and her solicitor firm withdrew from her case three weeks before it began. Her need to appeal coincided with cuts to legal-aid and she has been trapped in the prison system ever since. She is now working with Cardiff University’s Innocence Project on her appeal. Learn more about her case and appeal here: http://freedomforsam.org/about/

About Sam’s health: After ten years experiencing every abuse imaginable, Sam was sadly diagnosed with cancer in 2016.  She has still not had treatment. She has experienced intense medical neglect while being imprisoned in a for-profit prison, HMP Peterborough, run by Sodexo. Read the full story of her cancer situation here: http://freedomforsam.org/sams-cancer-timeline/

Anarchists in Derry will once again be taking part in the annual Bloody Sunday March for Justice 2018 which takes place on Sunday 28th January in Derry. This years theme marks the the 50th anniversary of RUC’s brutal response to the NICRA (Northern Ireland Civil Rights Association) on Duke Street in Derry march back in 1968 which is widely regarded as what launched us into decades of violent conflict.

In recognition of this historic event the theme of this years Bloody Sunday Commemorative events has been titled “We Shall Overcome”. As anarchists we call for all those who are interested in the struggle for social justice to participate in the events planned throughout the week leading up to the actual Bloody Sunday ‘March for Justice’.

To stand in solidarity with the courage and dignity of all of those Bloody Sunday families who march for justice, who defy state terror and exercise the right to protest around the world.